I had Rob and his son Eric back on the boat again this year. And the trip went almost a carbon copy of last years trip. Except without there marlin. The following day I had Doug Madden which was a group of farmers. At first they thought tuna fishing was gonna be easy but quickly learned that a tunafish is not a redfish. It was a great trip with lots of good natured ribbing the whole day. The only time that wasn’t going was when we were hiding behind a rig to knock down the wind and rain from a wicked thundetstorm that caught us. Two great days that had is north bound by noon. That kind of fishing you can’t beat. 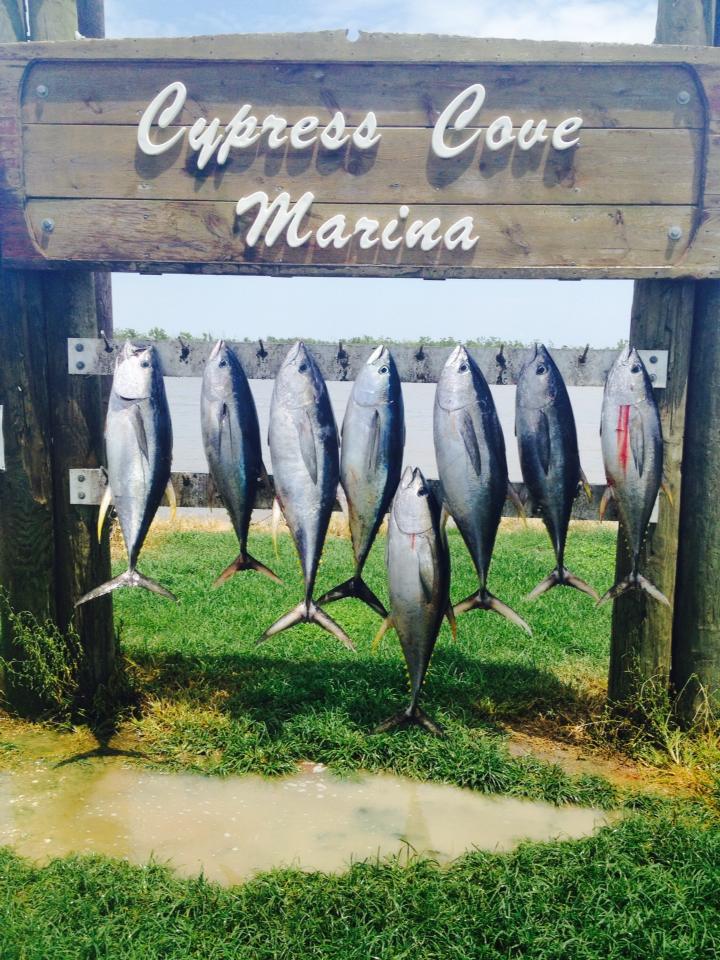 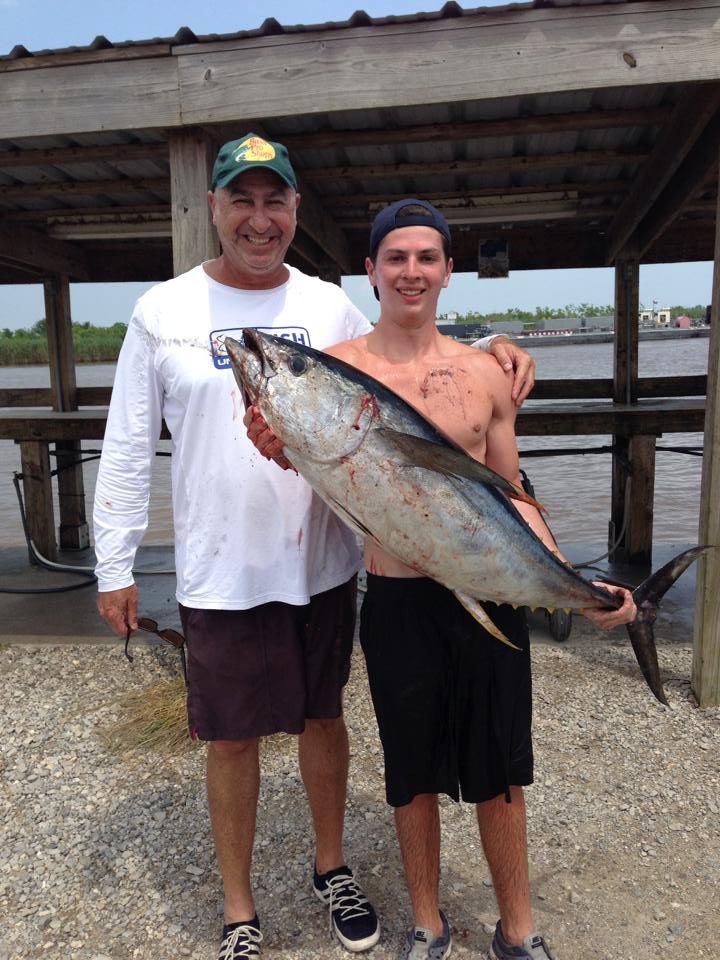 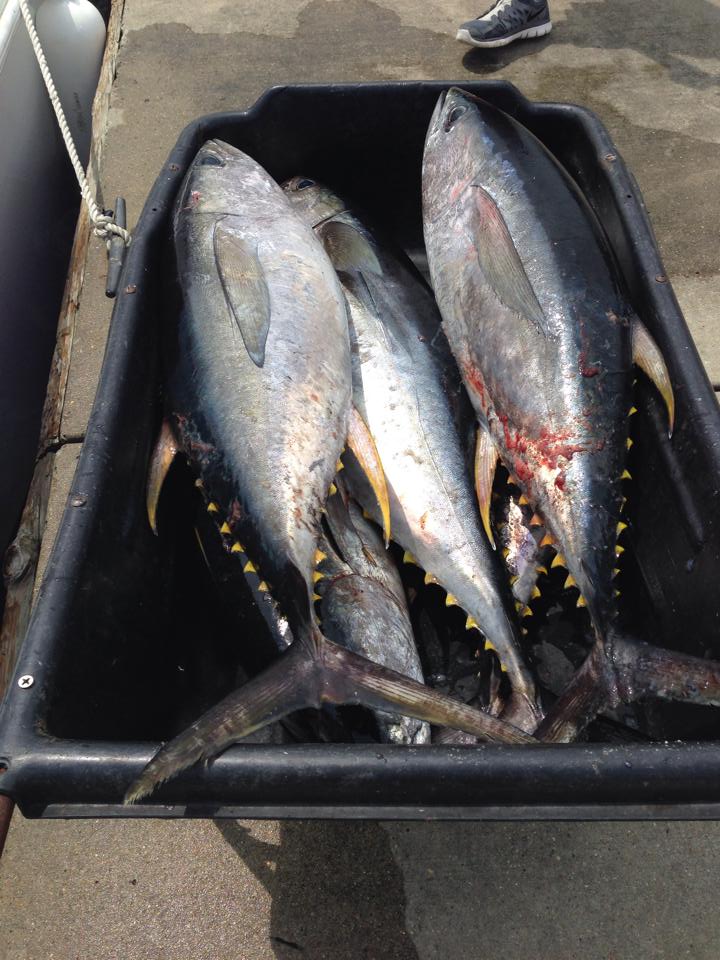 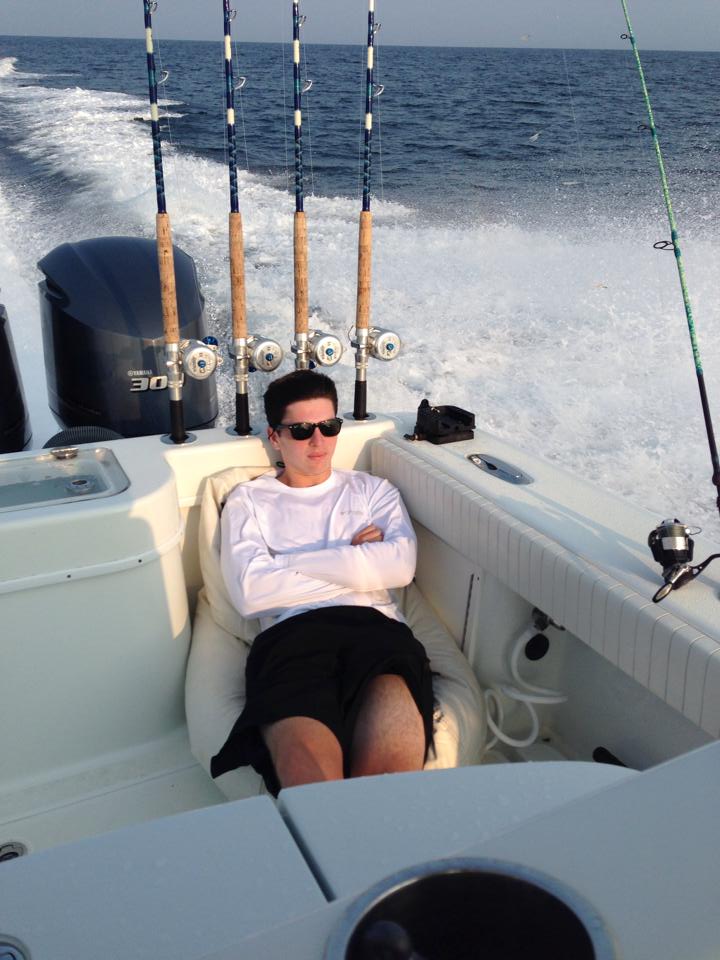 The tuna fishing is pretty good. But it’s a quick bite and then it’s over. If you haven’t caught them by noon they are done for day. Capitalizing on all bites has been real important. The fish have been a mix of 30-100lb yellows and all eating live baits. So have the sharks so for a investment tip by stock in Seaguar Flurocarbon. The sharks have been Relentless and have been chewing up leaders just about as fast as I can tie them on. We did get a susprise wahoo on a livebait with a Trokar TK-5 9/0. Other than that it’s been all yellowfin 60-80 Fluro has been getting the bites and the 9/0 Trokar has been the hook of choice for the size livebaits we are using. 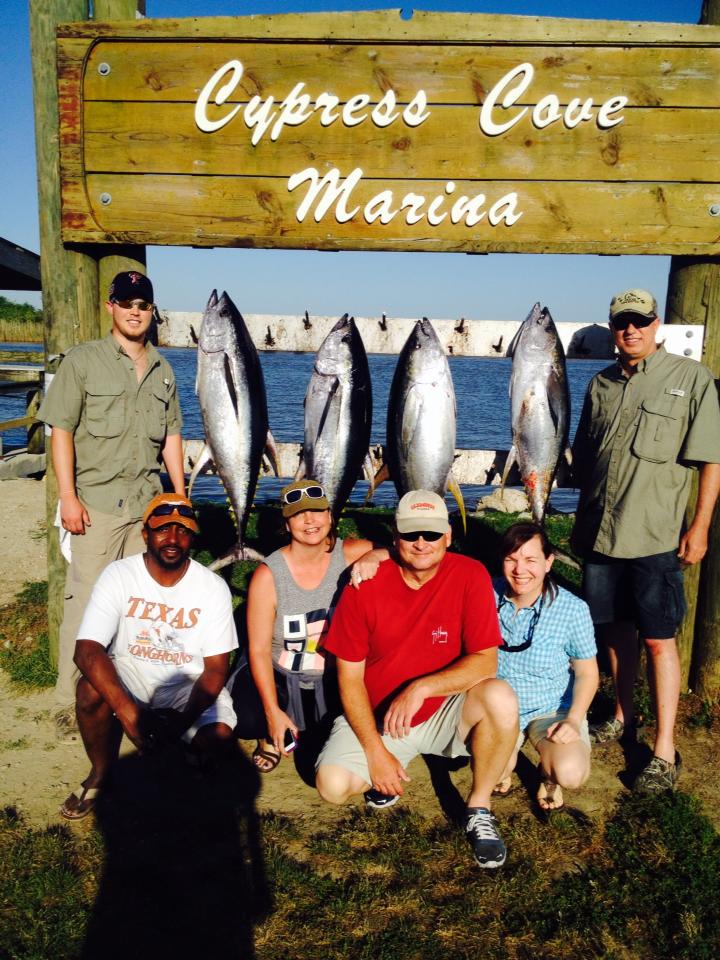 Here are some pictures that my client took from a trip this week. The day was action packed with catching yellowfins, blackfins and big wahoo.

This will be an easy report to write as just about every day was the same.  I started out on the 12th and ended up on the 23rd. The trip on the 23rd with the Scarborough group was one of the couple of trips that was different. And it was so due to no fog and the 4-6’ seas not the 2-4 the weather guessers had it at. I could only do 13 knots and not pound to bad. It took over two hours to make it to a very close in spot for some yellows. It started off pretty good with livebait coming easy. The only bad part was the sharks were there in force along with the tuna. They wouldn’t eat a livebait they would wait until you hooked a tuna and then bum rush him like he was on the wrong street in the city. We got lucky on the first one the second tuna we only got half and the next two we lost everything. You had to keep both engines in gear and the waves would still push you backwards several feet with every wave. With the nasty seas and shark army we ran north as best we could and got on the troll since we couldn’t run. And picked away at the Wahoo, jacks and blackfin on the troll. We ended the day with salt in our ears and noses and a very good box of wahoo, yellowfin, blackfin and jacks to show for it. Even though the wahoo fishing was stellar we paid the price to catch them.

Now this next trip sticks in my head not because of how good we did but because it shows how much a bad decision can cost. So I will take the blame for this day. I had Scott Winkler and crew in from North Louisiana for this one. The bait came very easy and I was thinking it was going to be rum drinks early today. Well on the way to the spot of choice we hit the dirty water that pushed out overnight. First mistake didn’t look at the water charts. Ok now problem we will just switch to plan B. We ran down the break looking for any open water fish while heading to plan B. Now here is where I make the wrong move. About three miles from our destination it is north of the dirty water line. (Later found out the clean water was a mile north of the rig)So I had no choice but to run LONG to get to some fish. We finally pulled up to the backup stop to the backup stop. The bait was a little bigger out there so we got a few more and was not that worried as it was a full moon and the bite is generally a midday bite. And it was we picked one up about 60lbs right away and then we had to wait for the next bite. With the day picking away and only one fish to show for it. I decided to get more bait and live chum the fish and make them bite. While making bait for the third time some fish came up and we pulled out and got a bite from a 75-80lb fish right away. Perfect they are going to turn on right, well not so much. Then to add insult to an already tough day. I got line in my wheel and had to jump in and take my prop off sixty something miles offshore. I don’t pray much except in situations such as this one. But someone must have been listening because it went as smoothly as possible. After that I tucked my tail and ran for the barn with our two fish at least they were solid fish. Rum drinks didn’t come early this day but they still came to ease the pain and frustration.

Now the rest of the days during this string were pretty much all from the same mold. We would wait until we had a little bit of light to maybe catch that stray log that the radar missed. Then we would run through the fog which had been the worst of the year. Once we got offshore it was the same fishing as in the summer. We would make bait drop the riggers and livebait fish the tuna. The standard setup was 60lb mainline and 60lb fluro. I did change out my hooks and have been using the Eagle Claw L2004 5/0 circle hook. It’s a bronze hook and once it’s in them it doesn’t come out. We didn’t have one pulled hook in a bunch of hookups. The downside to this hook is you have to use pliers to get it out. It really hooks and holds. The arrival of the first livebait of the year has to be the happiest time of the year.  No more nasty cutting board and chum cutting just good clean gentlemanly tuna fishing. The tuna cooperated just like they should. A lot of people got to catch there first yellowfin and then catch them till they said no more. It’s a great feeling when your customers for the day look at you and say lets go home we have more    than enough fish. There is something very satisfying to leave them snapping. This is how it went for eight days perfect weather and perfect fishing, Life is good. The only deviation to this schedule was a couple of blue marlin that tried to see what the fuss was all about. None were landed only a very brief hookup with a topwater lure on a 350 plus. Probably a good thing the hooks didn’t hold. I did end one day with a very accomplished fly fisherman  Bo Mason that has fished all over with a flyrod but doubted you could catch a snapper on a fly. After I told him about the IGFA records set on my boat on them he wanted to give it a shot. So on the way home we made a pit stop and gave him the drill and well, the snapper ate the fly as good as the tuna ate livebait that day. It was a very good string of trips. And I should be back at it after the little blow this weekend.