This winter/spring has been a rollercoaster for sure. The weather has been all over the place as well as the dirty water. I guess it was a dream to think it would be as incredible as it was last spring. Even with all of the wind and dirty water it still has been a very good spring. Of course some days leave you wondering what went wrong and others left you in shock that it was over that quick. This year the blackfin have been the biggest player on most days. And with no rhyme or reason at the exact same place the following day the yellowfin steal the show. And in typical spring fashion there is a kicker yellowfin in the 60-80lb range on most trips just to keep it interesting. Along with a few wahoo that have gotten a little to clumsy and didn’t clip us off. I have been using the Eagle Claw Trokar TK 4 hooks in 4/0 through 7/0 with good success. I have kept 60 fluro on two rods and straight mono on two others and there has been no difference for me in the bite ratio. The one thing that has changed is that the poagies I was netting and live chumming went AWOL and were nowhere to be found. Thankfully the tinkers have showed up and have been willing players. They are small but fishable. And the best thing about them is they swim away from the boat and not into the props. 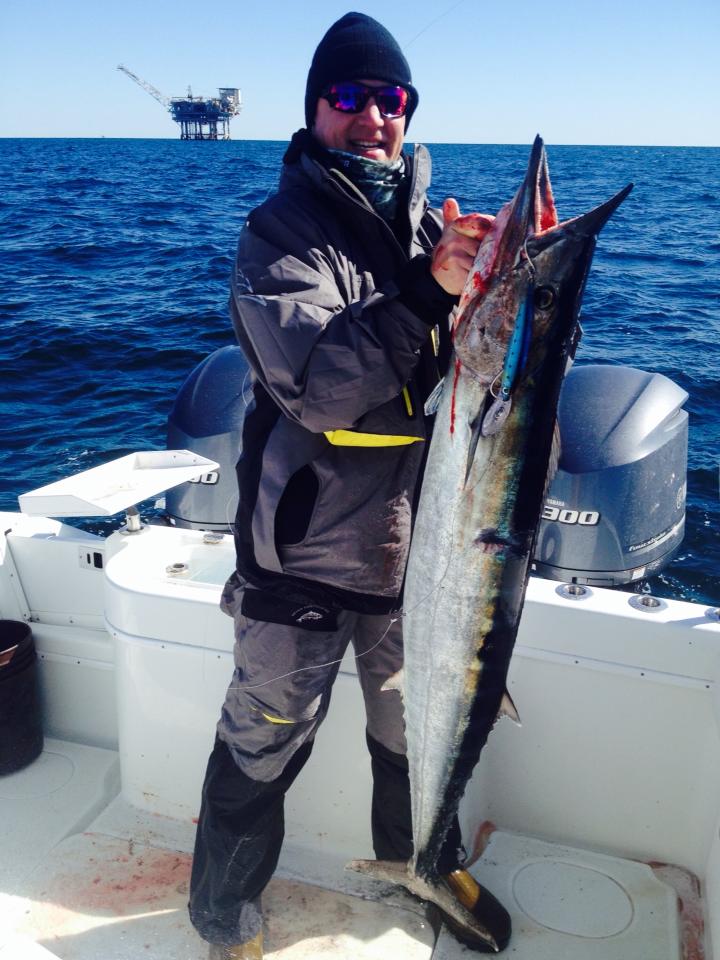 On 3/28 I have the Breland group in along with their young boys. This trip was perfect with the boys catching thier share of blackfin along with a couple of yellows while live chumming with poagies. But for them the real thrill was the AJ’s that was the perfect way to cap the day off. It’s the best thing when you hand someone the rod and they ask what the bite will be like and the next thing you hear is either a long stream of rather explict language or a loud crack as the rod gets slammed to the gunnel. We kept our limit of jacks and all of the blackfin they wanted and had a great day.

On 3/29 I ran a private boat and mother ocean threw a monkey wrench into our plans for the day. The aliens came and took all of the poagies away overnight. No worries the blackfin have been thick and jigging with 230 gram FC labo jigs has been almost a sure thing. We only wanted a couple to chum with but the first drop a wahoo in the 40lb range ate one. With a good fish in the boat right away the day was off to a good start. Now the blackfin are fired up on the jigs and enough was made for chunk bait. Since they didn’t want any blackfin to eat went pushed off offshore. This where it went downhill for us. We got offshore to find out we missed the bite because of the time we spent looking for poagies. So with our tail tucked between our legs we came back in. We hit a rig for Aj’s and it was pretty good the only problem was keeping the fish out of the rig with their jigging tackle. At least the day was looking up. We did manage to boat a couple of them for revenge. The next stop was for our snapper at the snapper factory. It went exactly as one would expect quick and easy as long as you didn’t put a bait below 15 feet. At least we ended on a very fun and high note with the ever willing red snapper. 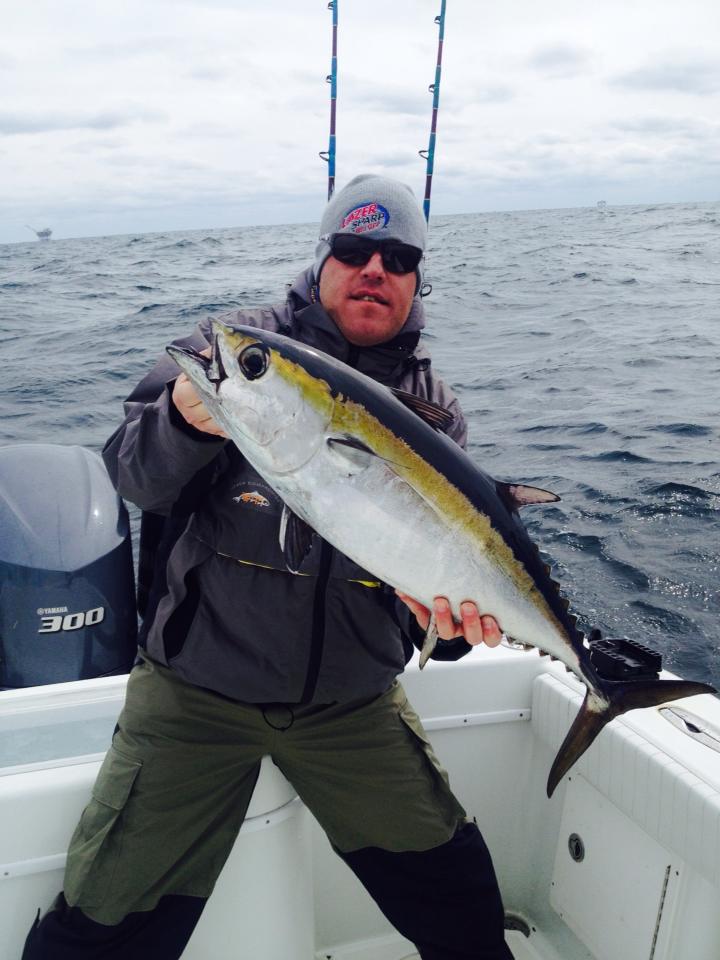 On 3/30 I had the Dykman group with the poagies gone we tried a little chumming but the current was wacky and all we were doing was spinning in circles. So I broke out the jigs and on the first drop was a nice blackfin that started fighting funny. We quickly found out why as a mako in the 350lb range skyrocketed on him and came completely out of the water. That was a cool sight but no video of it. With the current not working for us we just bounced around and fished jigs all day and put together a few small yellowfin a kicker one in the 70lb range and a bunch of blackfin. We also manged to box a couple of big beeliners on jigs as well.

On 4/1 I had the Delany group in for what was susposed to be two days. But the weather got us on thier second day which was susposed to be on Wednesday. Monday started out in triple rediculious fog that stayed with us all the way out to about 18 miles offshore and lasted until about 10:30 or so. It was tough trying to wahoo fish by radar but it started off well with a few blackfin and AJ’s. But it quickly slowed down as the kingfish and jack cravelle’s took over and that was all that wanted to eat on the troll. We went to jigging and boated a solitary yellowfin and a handful of blackfin for the day. Not a great day by any means but the boys got the catch some nice fish and a first yellowfin so it wasn’t a total letdown.

On 4/2 The Eubanks group got to experience some tough fishing for the first part of the day. But as the day wore on it got better and ended up well. The fog was much better although still pretty thick. The tinkers were a little on the tough side until I found out the exact sibiki they wanted after that it was easy pickings. After bait we ran and checked every rig that we had been fishing and had fish on them. With the radio traffic pretty gloomy we kept pushing on. At the last spot of the day and guys leaving from there with nothing or very little in there boxes. We tried it anyway right off the bat the tripled up on small yellowfin. About time it was 12:30 and nothing in the box. We stayed there for a little longer and picked up a couple of blackfin. When that small bite died we went a little farther north and finished the day picking away at the blackfin and beeliners fishing live tinkers on weights until they had enough.

The weather had me at the dock until 4/6 but the forcast let me get the Stowers group out. This day just didn’t have the feel to it that it should have. There have been a few tough days but at least it was a slow pick of fish but this day it was just dead. All we could manage was one yellowfin a couple blackfin two beeliners and an AJ. Some days you’re the windshield other days you’re the bug. From what I gather there were a lot of bugs that day. Of well that’s what rum is for to drown the sorrows of slow fishing. 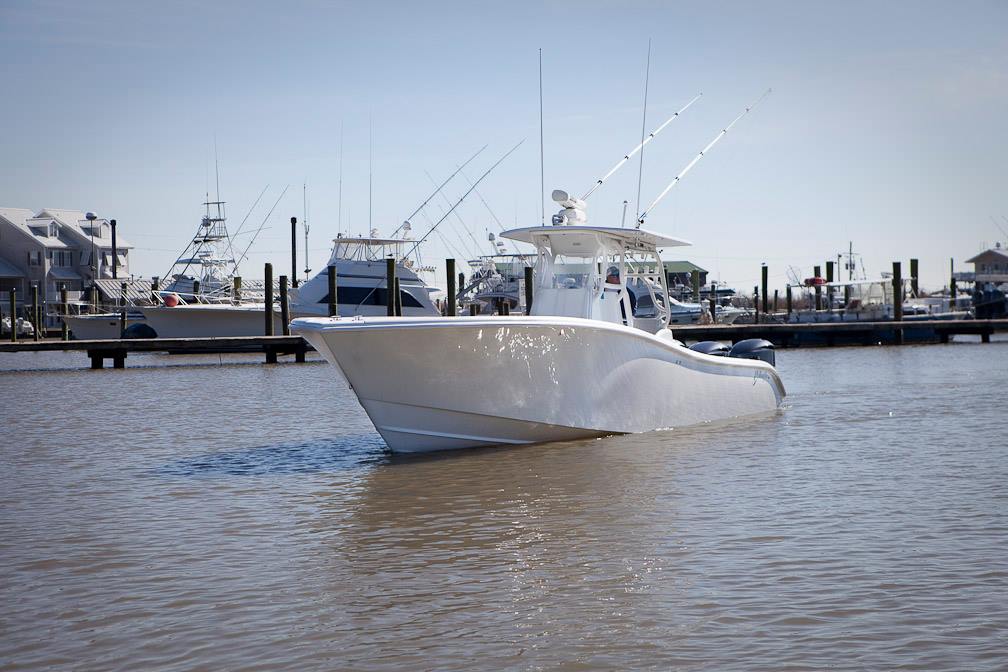 On 4/7 the Denmark crew had a day as easy as it gets. It was a day that you couldn’t do anything wrong. We didn’t miss a yellowfin and only had one get away from us. We had another susprise wahoo with the Trokar TK4 hook. I thought it was a white the way it ate slow and went for the surface. It was giving the Shimano Tranx reel a workout but we got him. The yellowfin wouldn’t let us get our line in the rigger clips before they were taking them. We ended up with a real nice box and hit the bait rig up for more bait and the best tuna fishing of the day. Everything we put into the water was eaten immediately with poppers and livebaits getting hammered ten feet from the boat. We ended the day on a high note and added another kicker fish of about 80lbs or so to the box. We threw the towel in around noon and headed to the house with happy anglers.
I will be back at it as soon as this little blow passes and as we move into late spring and early summer it will only get better.

Until next time catch ’em up.
Capt. Mike